​
On October 10 of 1918
During the spread of influenza in the Pandemic of 1918, which had seen its first New Jersey death at Camp Dix in the prior month, Newark officials order all schools and businesses to shut, leading to a period when "departments stores were deserted, meetings of fraternal and benevolent organizations were cancelled, and social gatherings were postponed," according to a 1969 article in the Bulletin of the History of Medicine. In Hackensack, the mayor also ordered the closing of  "all churches, theatres, moving picture houses, dance halls, pool rooms, lodge rooms, saloons, soda fountains and other places." In South River in Middlesex County, some 400 unmarked graves were determined in 2018 to be of those who died during the Pandemic.
​
On October 11 of 1811
Inventor and Revolutionary War Colonel John Stevens of Hoboken begins operating the first steam-powered ferry, the Juliana, between Manhattan and Hoboken
​
On October 12 of 1920
Construction begins on the Hudson River Vehicular Tunnel, later named the Holland Tunnel in memory of its chief engineer Clifford Holland, connecting Jersey City with Lower Manhattan. It was opened on November 13, 1927.
​
​On October 13 of 1868
The faculty of the College of New Jersey approve a resolution permitting students to adopt and wear orange ribbons imprinted with the word “PRINCETON.” The color honors England’s Prince William III of Orange, for whom Nassau Hall on the campus  is named. In 1874, William Libbey, Jr., a member of the Class of 1877, obtains 1,000 yards of orange and black ribbon for freshmen to wear as “Princeton’s colors.” They are officially adopted as the university's colors when the College of New Jersey is re-named “Princeton University” in 1896. On November 19, 1969, Apollo 12 astronaut Charles "Pete" Conrad, an alumnus in the Class of 1959, stepped onto the surface of the moon with a flag displaying the Princeton seal and colors, a flag which on his return he donated to the University Archives.
​
On October 14 of 1916
Rutgers sophomore tackle and guard Paul Robeson is excluded from the Rutgers football team when Washington and Lee University refused to play against a black player. Robeson later was named twice as a football  All-American, and also became class valedictorian, a lawyer, and one of the best-known actors, singers and speakers, as well as provoking controversy over his advocacy of civil rights and socialist policies. .

On October 15 of 1928
The German airship Graf Zeppelin completes its first trans-Atlantic flight, landing at Lakehurst
​
​On October 16 of 1935
Governor Harold G. Hoffman secretly visits and interviews convicted Lindbergh baby kidnapper Bruno Richard Hauptmann in his cell at the Trenton State Prison. Hoffman had expressed doubts about Hauptmann's alleged role as the sole kidnapper, suggesting that others also should have been charged as accomplices, and also had criticized the quality of the evidence produced in the investigation headed by Colonel Herbert Norman Schwarzkopf, the first superintendent of the New Jersey State Police. After seeing Hauptmann, Hoffman granted a 30-day reprieve delaying the execution originally scheduled for January 17, 1936, but subsequently under intense pressure allowed the execution to proceed, which was carried out by electrocution at the Prison on the evening of April 3, 1936.
​
On October 17 of 1933
Fleeing from Nazi Germany, Albert Einstein and his wife  arrive in Princeton, where he accepts appointment as a member of the faculty to continue his scientific research at the Institute of Advanced Study.
​
​ 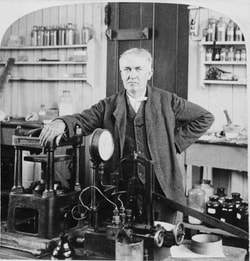 On October 18 of 1931
Thomas Alva Edison, one of the most prolific inventors in history awarded 1,093 patents during his lifetime, dies at his home in West Orange at the age of 84
​
On October 19 of 1915
New Jersey voters in a statewide referendum reject amending the state Constitution to extend the right to vote to women by a vote of 184,390 to 133,282. New Jersey’s first constitution, hurriedly drafted and adopted  in 1776, gave voting rights to 'all inhabitants of this colony, of full age, who are worth fifty pounds … and have resided within the county … for twelve months.' While some thought the 'all inhabitants' reference was inadvertent given the haste in drafting, in 1790 the legislature reworded the law to say 'he or she,' clarifying that both men and women had voting rights (although only single women could vote because married women could not own property). Still, many unmarried women voted in New Jersey in the 1790s and the first years of the 1800s, and women voters became targets of charges that they were easily influenced and were used to swing heavily contested elections. In 1807, the state legislature restricted suffrage (voting rights) to tax-paying, white male citizens. This was done to give the Democratic-Republican Party an advantage in the 1808 presidential election. Women often voted for the opposing Federalist Party, so taking away women’s voting rights helped the Democratic-Republicans. This law also took voting rights away from African Americans.
​
​ 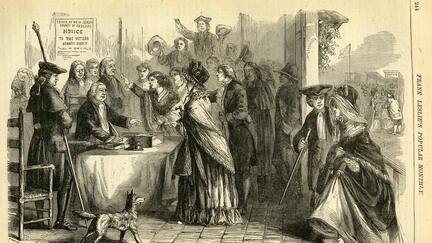 “Women Voting in New Jersey Toward the Close of the Last Century from an Old Illustration”. Image: University of Minnesota Libraries.
On October 21 of 2013
​Same sex marriage becomes legally recognized in New Jersey when a trial court ruling takes effect in the case of Garden State Equality v. Dow  invalidating the state's restriction of marriage to persons of different sexes and after the State Supreme Court denies a motion to stay the implementation of the lower court's decision.
​
On October 22 of 1746
The College of New Jersey (renamed Princeton University in 1896) receives its charter from King George II, under the seal of John Hamilton, Acting Governor of the Royal Province of New Jersey. It is the fourth college to be established in the British colonies—after Harvard (1639), William and Mary (1693) and Yale (1701).

On October 24 of 1931
After four years of construction, the George Washington Bridge is dedicated and opened to traffic on the following day. It was the longest main bridge span in the world at the time until being surpassed by the Golden Gate Bridge opened in 1937.
​ 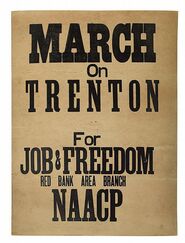 On October 26 of 1963
An estimated 4,000 people join in a civil rights “March on Trenton for Jobs and Freedom.” It is the first statewide civil rights demonstration in the US, having been modeled on the March on Washington the previous August 28. 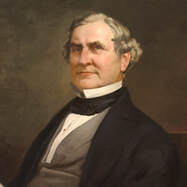 On October 27 of 1837
William Pennington, a member of the Whig party, is sworn in as the 13th governor of New Jersey and subsequently would be elected to seven successive single-year terms. He is later elected as a Republican to the US House of Representatives and serves as Speaker of the House during his single term from 1859 to 1861.

​On October 31 of 2012
President Obama tours storm damage from Hurricane Sandy in New Jersey, with Governor Christie's warm welcome of the President just before the presidential election criticized by some Republicans as undermining voter support for Mitt Romney. 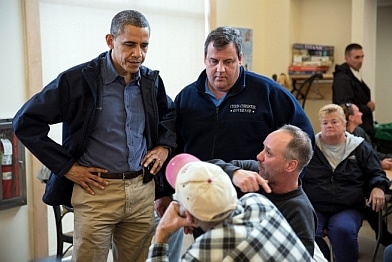