​* January * February * March * April * May * June * July
* August * September * October * November * December
On April 4 of 1933
Dirigible USS Akron, while on Navy mission from New Jersey, encounters high winds and crashes in Atlantic, resulting in 73 deaths of 76 aboard, the deadliest air disaster to that point.
​
On April 6 of 1938
DuPont scientist Dr. Roy Plunkett accidentally discovers what will be known as Teflon while working with others to develop a non-toxic refrigerant at the company's Chambers Works plant in Pennsville Township.Teflon becomes one of DuPont's best-known products, adapted for such uses as a lubricant and coating for industrial machinery and cooking pans.
​
On April 7 of 1985
Running back Herschel Walker of the New Jersey Generals of the US Football League runs for 233 yards, a USFL record, in a 31-25 victory over the Houston Gamblers at Giants Stadium

John P. Holland in hatch of one of his submarines. Image: Wikimedia Commons
On April 11 of 1900
The US Navy acquires its first submarine, a ship designed and built by Irish immigrant and former Paterson Catholic school teacher John P. Holland, which is subsequently commissioned in October 1900 as the USS Holland. The Navy later orders six more of the Holland submarines, which are built in a shipyard in Elizabeth.
On April 12 of 2007
Governor Jon Corzine is severely injured in an accident when his SUV driven by a state trooper crashes into a guardrail. The Governor was on his way to a meeting at the Governor's Mansion in Princeton with radio host Don Imus and the Rutgers women's basketball team. Shortly before the scheduled meeting, CBS announced that it had fired Imus for calling the Rutgers team "nappy-headed hoes" on his show on April 4.
​On April 13 of 1777
Some 4,000 British and Hessian troops under the command of Lieutenant General Charles Cornwallis capture an American outpost in the Battle of Bound Brook.
​
On April 14 of 1865
After declining President Lincoln's invitation to accompany him and Mrs. Lincoln to the theater, General Ulysses S. Grant and his wife Julia travel by train to visit their children at a home they had rented in the City of Burlington. After being advised at the stop in Philadelphia that the President had been shot, Grant continues on with his wife to Burlington before quickly returning to Washington.
​ 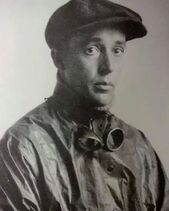 Wahington A. Roebling II Image: Wikipedia
On April 15 of 1912
RMS Titanic sinks after striking an iceberg, with only 712 of its 2,344 passengers and crew surviving. The  11 lost from New Jersey include 31-year-old Washington A. Roebling II of Trenton, founder of the Mercer Automobile Co. and namesake of his uncle Washington A. Roebling, best known for supervising the construction of the Brooklyn Bridge initially designed by his father John A. Roebling. Titanic seaman Robert J. Hopkins, an Irish immigrant who resided in Hoboken, was credited with saving over 100 in a lifeboat by quickly cutting ropes which entangled it as it was lowered from the ship.
On April 16 of 2007
Record floods hit New Jersey after 7 to 10 inches of rain from a storm with winds up to 50 miles per hour. The Hackensack River and the Great Egg Harbor River set 100-year peak flood levels and other rivers such as the Passaic, Raritan, Rahway and Whippany also flood nearby areas.
​
On April 17 of 1907
Ellis Island processes 11,747 immigrants, the highest daily total in its history. During the year of 1907, a total of 1,004,756 persons arrived seeking entry to the US.
​
On April 20 of 1963
Fires break out in the Pinelands and continue for four days, ultimately causing seven deaths and burning over 160,000 acres
​ 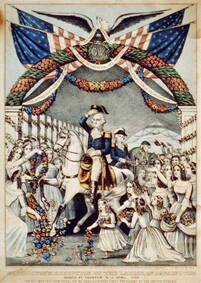 On April 21 of 1789
George Washington enters Trenton under a triumphal arch constructed in his honor on his way to New York to be inaugurated as the first US president.
​
On April 22 of 1994
Richard M. Nixon, who had suffered a stroke at his home in Park Ridge four days earlier, dies at the age of 81 at a Manhattan hospital.
​ 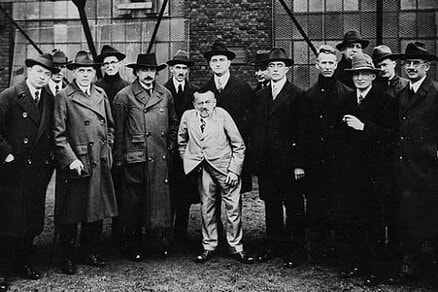 ​On April 23 of 1921
Scientists Albert Einstein (5th from left) and Charles Steinmetz (center in light suit)  shown during a a tour of the Radio Corporation of America New Brunswick experimental transoceanic wireless station along with leading RCA scientists and officers, as well as engineers and scientists from the General Electric Company, American Telephone and Telegraph Company, and Western Electric Company.
On April 24 of 1865
After stopping in Philadelphia on the previous night, the funeral train carrying the coffin of Abraham Lincoln proceeds across New Jersey, passing through Trenton, Princeton, New Brunswick, Metuchen, Rahway, Elizabeth, and Newark. In Jersey City, the coffin is taken from the train and ferried across the Hudson River to New York City Hall where crowds estimated at 500,000 line up to pass the coffin. 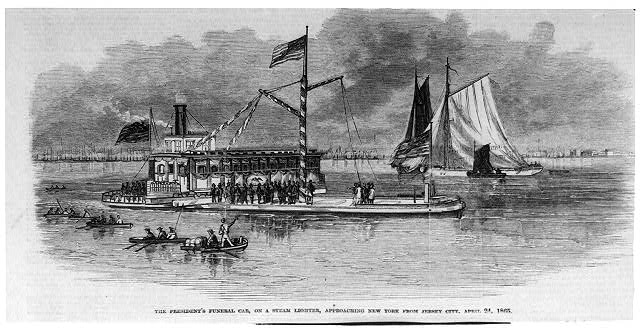 Drawing of Lincoln funeral car crossing from Jersey City to Manhattan. Image: Library of Congress
On April 25 of 1957
Massachusetts Senator John F. Kennedy addresses the graduating Princeton Class of 1957, urging their participation in politics as "intellectuals...who deal with the truth, unlike politicians who deal in half-truths--in order to keep the voters' interest." Kennedy had been a member of the Princeton class of 1939, opposing his father’s desire that he enroll at Harvard, but left Princeton in December of his freshman year due to a gastrointestinal illness which hospitalized him. He later transferred to Harvard, where he graduated with the class of 1940.

On April 26 of 1979
Anthony “Little Pussy” Russo, a purported member of the Genovese organized crime family, was shot to death by fellow Genovese mob members at his luxury oceanfront apartment in Long Branch while on an Easter furlough from prison. No one is ever charged with the crime. Russo was known for his flamboyance, wearing expensive jewelry and driving a pink Cadillac convertible. 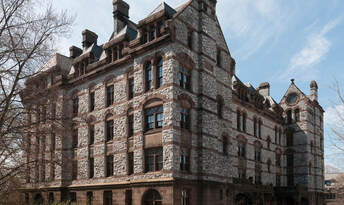 ​On April 27 of 1877
Witherspoon Hall is completed on the campus of the College of New Jersey (renamed Princeton University in 1896).  It is the first dormitory in the country with indoor plumbing.
On April 28 of 2011
Panasonic Corporation, with its North American headquarters in Secaucus, announces it will cut 17,000 jobs and close up to 70 factories around the world, adding to the 18,000 layoffs implemented in the prior year. The announcement  comes shortly after the company discloses that it intends to relocate its headquarters from Secaucus to Newark.
​

Sidney Reso. Image: http://oncrime.blogspot.com
On April 29 0f 1992
Exxon executive Sidney Reso is abducted from the driveway of his Morris Township home by Arthur Seale, a former police officer and Exxon security consultant who was fired by Exxon in 1987, and Seale's wife Irene. Reso was shot in the arm, bound and gagged and placed in a wooden box in a poorly ventilated storage space where he died of suffocation. The Seales are later arrested, convicted on federal kidnapping charges and imprisoned.
On April 30 of 1987
​Lou Lamoriello is named general manager of the New Jersey Devils of the National Hockey League. He would go on to win three Stanley Cup championships during his 27-year tenure before resigning in 2015 to become general manager of the Toronto Maple Leafs
​* January * February * March * April * May * June * July
* August * September * October * November * December