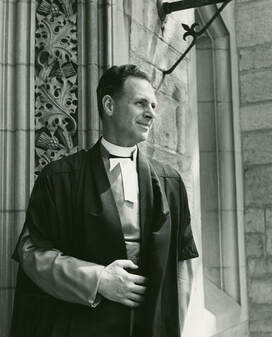 Ernest Gordon at Princeton. Image: Mudd Manuscript Library, Princeton University
On August 15 of 2002
Ernest Gordon, who as a captain in the British Army spent 40 months as a prisoner of war in the Japanese prison camps which used forced labor to build the famous bridge on the River Kwai, dies in Princeton at the age of 84. After his release, Gordon emigrated to the US in 1950 and later was named as the Dean of the Princeton University Chapel in 1955, serving until his retirement in 1981.
On August 16 of 1968
A Blues/Rock trio called Earth debuts in a coffee house in Red Bank. The guitarist and singer is 18-year-old Bruce Springsteen.

On August 17 of 1896
The city council of Atlantic City adopts a resolution formally designating the wooden walkway along the beach, first built in 1870, as “The Boardwalk.”

On August 18 of 1918
Fights between white and African-American soldiers at Camp Merritt in Bergen County break out after white soldiers from Mississippi forcibly eject five black soldiers from the Camp's integrated YMCA building. Military Police are dispatched to break up the hostile crowds with swinging nightsticks; several shots are fired, with two black soldiers wounded and a third, who was sitting in his barracks and not involved in the disturbance, killed by a stray bullet which struck him in the chest.
On August 21 of 1957
After service during World War II and the Korean War, the Battleship USS New Jersey is decommissioned. It would later be re-commissioned, however, in 1968 for service in the Vietnam War and also subsequently was deployed in the Middle East.
On August 22 of 1906
The Victor Talking Machine Company based in of Camden began to manufacture the Victrola. The hand-cranked unit, with horn cabinet, sold for $200.
On August 23 of 2011
One of the largest earthquakes ever recorded in the eastern United States, with a magnitude of 5.8 on the Richter Scale centered in a rural area of Virginia, sent shock waves across much of the East Coast, including New Jersey and as far away as Canada.
​On August 24 of 1876
Abraham Browning of Camden is believed to have been first person to refer to New Jersey as "the Garden State" while speaking at the Philadelphia Centennial exhibition on "New Jersey Day." ​In 1954, a bill was  passed by the legislature to include the slogan on license plates, but Governor Robert Meyner vetoed it, stating that he did not find the "Garden State" term to be particularly relevant to describe the state's diverse qualities. The bill was enacted into law, however, when the legislature overrode his veto.
​
​On August 26 of 1791
John Fitch, a former Trenton gunsmith, is granted a patent for his invention of the steamboat. Fitch had operated a service for paying customers on the Delaware River between Burlington and Philadelphia in the summer of 1790. 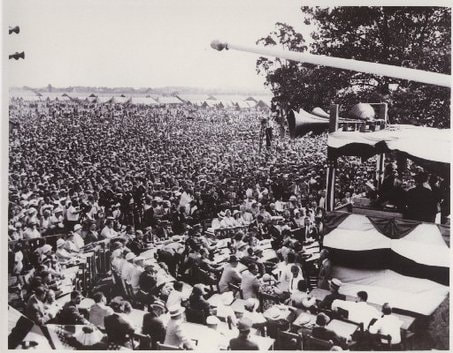 On August 27 of 1932
Jersey City Mayor Frank Hague organizes a rally launching the presidential campaign of Franklin D. Roosevelt which attracts a crowd of 100,000 to the National Guard training center in Sea Girt. The success of the rally aids Hague in becoming the key New Jersey liaison to the Roosevelt Administration in obtaining federal funds and jobs. 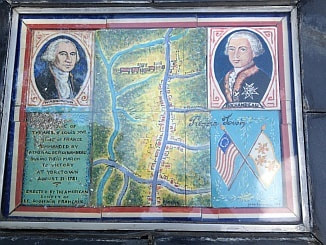 Plaque in Princeton designating meeting of Franch and Continental armies. Image: NewJerseyAlmanac.com
On August 29 of 1781
​French forces commanded by General  Jean Baptiste de Rochambeau and Continental Army under George Washington join together at Princeton. On September 1, they break camp  to march south on their way to Yorktown, Virginia. With the aid of the French fleet, their combined armies would trap the British under the command of General Lord Charles Cornwallis and force his surrender on October 19.